I have played a lot of games over the years, going back to the C64 and our Intellivision, to a huge amount of time spent on the Xbox since it launched, and if you were to ask me what types of games I liked, the answers would really vary. I really enjoy RTS, I’ve played a lot of first-person shooters, I like 4X strategy games, racing, and even some platformers.

I have recently discovered though, that there are two basic kinds of games that are my absolute favorites. My first passion was for D&D, writing more adventures up and creating more backstories than I ever actually played the game, but almost every video game I’ve really liked (Baldur’s Gate, Skyrim/Oblivion, KOTOR, Divinity) has been an attempt to recreate the enjoyment of D&D in a computer form. I can tell that I still love that type of game. The second type of game I am into though, was the first type of video game I was completely obsessed with, and yet one that I have almost never played for the past 25 years and that is space games.

When I was in college I joined the Genie network and would dial-up to play a game called Fed (aka Federation II). This was an early online multiplayer game, with an all-text interface, but it still completely captured my attention. You were the owner of a ship, flying around the galaxy, ferrying cargo from place to place and occasionally fighting off pirates.You would play by typing in commands to move in different directions, fire weapons, land, buy/sell commodities, and chat with other players.

There was a ‘client’ for the game, called FedTerm, but I wrote my own (in Think Lightspeed Pascal) because I had decided to automate the trading process. I had an app that would scan all of the commodity prices across all the systems and then do the math to figure out the most efficient trading routes throughout space. Shortly after, I took it to the next level and I automated the process of having my ship fly from place to place, fill up with the desired cargo and then fly to the destination and sell it. Basically, I made it so I could leave the game running and my ‘bot’ would happily make money all day. Not really playing the game at that point, but it was an intellectual challenge and I had to learn all the ins and outs of terminal communication code through Pascal on a Mac, so it fit in well with my future profession as a developer.

After a few weeks of playing the game for hours and hours a day, mostly while I slept, I received a bill for around $1200. Turns out, in addition to the monthly fee for the GEnie service (which I was completely aware of), there was also an hourly connection fee of around $5 that I had no idea about. My fault for not reading the terms of use correctly I suppose, but it meant that I immediately quit playing this game, and never went back to it.

Flash forward nearly 30 years (wow), and I recently discovered a game called Elite Dangerous, and it is the spiritual successor to Fed in every way I can imagine. It is described on Wikipedia as a Space Flight Simulator, but that is fairly misleading. It is a flight simulator, because your primary UI is always as if you are sitting in the cockpit of your ship, but you are doing so much more. You can take passengers on sightseeing trips, transport people from place to place, buy and sell cargo (with an active commodity market on thousands of stations across thousands of star systems), land on planets and drive around, fight pirates in space combat or just fly around and discover new worlds and experiences. It has such an active user base that tools and information for trading, navigation or exploring are available all over the web. 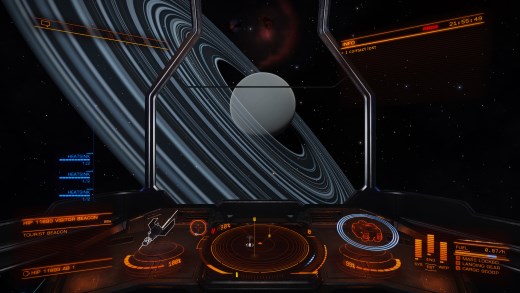 Imagine Fed, but with high-resolution graphics and even the option to use a VR headset! Once I tried it out, I immediately went and bought a larger monitor and a joystick/throttle combination to use with it. I’m not quite ready to jump to VR, but otherwise I’m trying as hard as I can to make my desk at home feel like I’m flying Serenity or the Millennium Falcon around (you can have a friend fly with you and operate turrets on your ship by the way, “Don’t get cocky!").

I don’t really have any deep purpose in this game, which is probably for the best, given that it is supposed to be for fun :). I’m happily cruising around gathering up credits, buying nice ships, and generally enjoying myself.