When I’ve had to contact a company’s technical support through a form, I provide a ridiculously detailed description of what the issue is, when it happens, the specific troubleshooting that narrows it down, and (if it is allowed by the form) screenshots. I suspect the people on the other end aren’t used to that, because I know it is not what happens most of the time when people submit issues to me.

It’s fun to point out that a message like “Hey folks, is it normal for the layout on some pages to be messed up on my phone?” isn’t useful, but perhaps it is more helpful to explain precisely why.

What’s the benefit of an effective bug report? #

There are two sides to this, one is the efficiency of the interaction between the bug reporter and the (hopeful) bug fixer and the other is the actual likelihood that the issue will ever be fixed. In the first case, it is a bit like the idea of “no hello”… if you don’t provide enough information right from the start, there will need to be an ongoing back-and-forth.

User in a support thread: Hey folks, is it normal for the layout on some pages to be messed up on my phone?

Helpful Dev Team Member: No, that doesn’t seem normal. What page are you seeing this on?

U: Some of the pages in the .NET docs

D: Can you give a specific URL or URLs?

D: That page seems fine to me, on my phone and on the couple other devices I’ve checked so far. What do you mean by “messed up” and what phone are you using?

U: Oh, it’s a Samsung, and the text is just not lining up right

… (imagine this continues for 5 or 6 more messages)

Imagine if each of these messages had a few hours or days between them, as people could be checking in on the thread infrequently, and perhaps time zones means that the two people are unlikely to be online at the same time. If, in the original message, the user had tried to supply enough data to reproduce the problem, this could work a lot differently.

D: Thanks for all the info, I looked at the links and screenshots you sent, and I was able to figure out the problem. A fix is being deployed today after a quick review.

That’s an ideal outcome of course, but even if the problem can’t be fixed that quickly, a clear set of steps to reproduce the problem (often called “repro steps”) is the best way to help move the problem forward. Less time is wasted, for everyone, and the fix could happen much quicker.

The first part of fixing a problem is to make sure you understand it and can see it in action. If you can’t see the problem happen consistently, you can’t be sure you’ve fixed it. This is not a software development concept; it is true with nearly everything. If someone tells me the faucet is dripping, I’m going to want to see the drip happening before I try to fix it… then when I look and see it not dripping, I can feel confident that I resolved the problem. With a bug report, I always make sure I can ‘test’ the bug by reproducing it, because then I know that I can follow those same steps to make sure I’ve fixed it in the end. We are talking about submitting and creating bug reports here, not fixing them, but ideally the developer would create a test that covers the same issue as the bug. That test would fail before a fix is in place and then pass.

As a user, you want your issue to be resolved, and you are in the best position to help with that. You’ve seen the issue in action right in front of you, that’s why you are filing the bug. If you want the most efficient path to solving the problem, figure out a clear set of steps to reproduce the problem and provide those when you submit the issue. Screenshots, especially if you can highlight what you are reporting, are extremely valuable, and for a web site, including a link is critical. 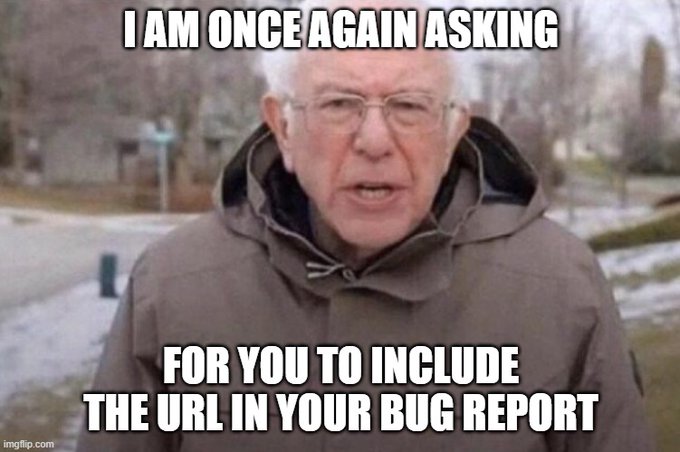 If just going to a page isn’t enough to see the issue, then describe the series of steps that will get you to the right point.

Is it possible to provide too much information? #

I’d rather have too much detail than too little, but I also feel that the bug reporter shouldn’t be expected to try to track down every possible variable or to try to fix the problem. I’m guilty of this sometimes, I see an issue, I write up the detailed repro steps, then I fiddle with dev tools or browse though the code and try to produce ideas on what needs to be changed. I assume that most of the time, the actual experts are going to ignore my thoughts and just focus on the repro steps, but I could be adding confusion to the discussion.

For a user, you should consider anything beyond accurate and detailed repro steps to be ‘extra’. I’ve had people tell me a lot of information without including the repro steps and that’s frustrating, because I can tell they really want to help and they are willing to put the time in, but their effort was spent on the wrong things. Telling me you found a broken link and were able to repro that on three machines and two browsers is great if you also tell me what link and where you found it.

I mentioned two sides to this, the efficiency of interaction and the likelihood an issue will be fixed. If you assume someone will ask for all the missing info, even if it takes a lot longer, then the only benefit to a complete bug report is efficiency. In reality though, developers are human, and when they see an incomplete issue where it could take many back-and-forth conversations to get the details they need, they will avoid it in favor of one that they can pick up and work on right now with no delay. Your issue, which could be more important than anything else in the queue, could end up being ignored because it is unclear.

A detailed bug report, with clear repro steps, is a win for everyone.

You may also like subscribing to my newsletter where I share a weekly roundup of web development links and commentary.