Another chess tournament this weekend, last one before the state championship 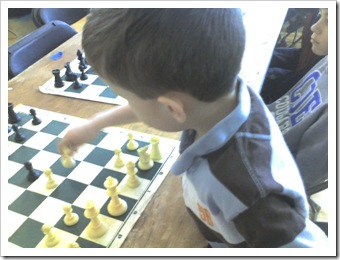 A new father-son activity for Connor and me has been to go to chess tournaments, spending a few Saturdays throughout the year in some school gym. Starting last year, we started to play chess at home and he enjoyed it so much that we decided to enter into the Shelton View Elementary school’s chess tournament in the Kindergarten category. He did well and had a lot of fun, so it has become the hobby of choice around our house. The best thing about taking him to a tournament is that you can’t really tell from his face whether he has won or lost when he comes out of a match, he always seems to be enjoying himself regardless of the outcome. Tomorrow’s tournament is the last one before the state competition (which he qualified for and we decided to attend as well, since it is in Redmond this year), so I expect a lot more first-time tournament players will be attending in the hope of winning 3 out of their 5 games and qualifying for state.

← Sunburned at a Chess Tournament Sidebar Gadgets for Channel 9, Channel 8 and more →